Neegan Burnside Ltd. was retained by Manitoba Hydro to provide engineering design and contract administration for the construction of a two-cell facultative lagoon at the Kelsey Generating Station located in Northern Manitoba along the Nelson River. The project began in October 2015 and final completion of all deliverables was achieved in April 2020.

Neegan Burnside completed the preliminary and detailed design of a two-cell facultative sewage lagoon complete with a building and outside standby diesel generator power source. A geotechnical investigation was completed in the preliminary design phase to evaluate two potential sites for the lagoon and to assess the quality of the clay soil material at the sites. The lagoon was constructed using a clay liner because low conductivity clay was encountered at the lagoon site, which is well suited for use as a lagoon liner. In the selected location, there was a drop in topography which presented a design challenge. To account for this, the two lagoon cells were constructed at different elevations with a weir structure between the cells.

This project also involved the installation of 30 m of gravity sewer, a lift station with a duplex pumping system, alum chemical dosing, 350 m of forcemain, a gravel surfaced access roadway, and the decommissioning of existing Bioclear and Bio Brane mechanical sewage plants and their associated underground utilities. Test holes were advanced along potential forcemain routes during the geotechnical investigation so a route could be selected that best avoided a nearby landfill and areas with other unknown buried debris. A soft digging contractor was mobilized to locate underground cables and utilities, as the location of many underground utilities at the 70-year-old site, were unknown or poorly documented. The locations of many unknown electrical conduits were uncovered, surveyed, and photographed. Neegan Burnside had a site representative on-site during the lagoon construction process monitoring the contractor’s methods and progress. 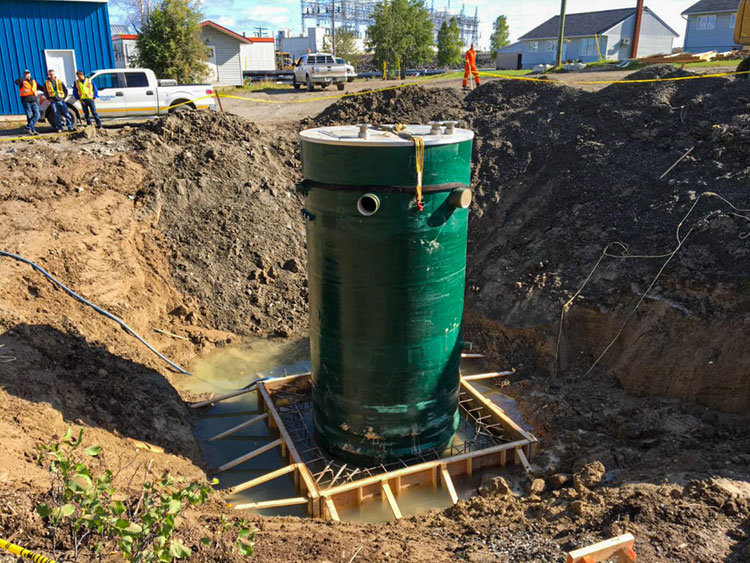 Engineering projects of all shapes and sizes.

Employee-owned and dedicated to our people.
Become part of the team.